After three months in Palm Creek, Carol and I pulled up stakes and headed west to Yuma.

I didn’t have much in the way of expectations for Yuma but boy were we in for a nice surprise.  When we drove through town to our hotel (well, it was my Bday eve and I thought a king bed might be nice), we were surprised to see a very clean and updated city.  Who knew?

When I approach a new city, I wonder to myself ‘why is it here?’.  It’s usually geographical and that’s the reason here.  Yuma is located on the Colorado River at the narrowest width of the lower part of the river.  So naturally that’s where the Native Americans and early settlers crossed.

Then all hell broke loose during the 1848 gold rush as thousands descended upon Yuma.  If you were in a covered wagon, you’d cross on a road ferry.  Otherwise, it was into the water you went and when you came out the other side, you were in California.  Here’s a pic of one of the info signs. 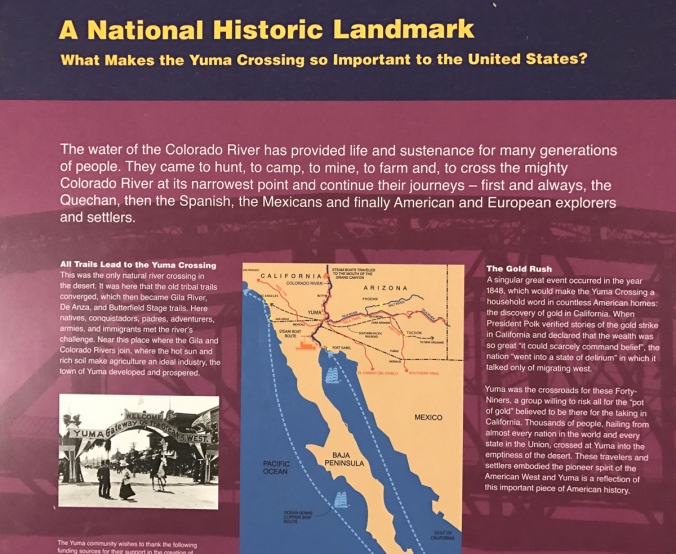 No party was bigger than the rush to California gold and that brought out some, uh, bad hombres (to quote our President).  At that time, Arizona was a territory and their response was to build the Territorial Prison which opened in 1875.  Can you imagine doing time there during the summer?  No thanks!  Here’s a pic of the cell block area.  It’s really a pretty cool place if you pardon the pun.

After decades of ferry crossings and wooden bridges, the first modern bridge was built in 1915 and linked the lower west and east coasts.  It’s called, wait for it, the Ocean To Ocean Bridge.  Here’s a crappy iPhone pic that I took while walking TiVo that night.  And yes, they are proud of it so it gets neon lights.