The African wild dogs are pack animals that are highly efficient hunters.  Their main prey are antelope that they hunt to exhaustion.  In 2016, they were classified as endangered as they have disappeared from much of their traditional range.  We were very fortunate to sight and follow two packs during out safari.

First up was more family than pack as there were only four members: male, female and their two pups.  Perhaps the female split off from one of the other packs?

Here they are at the water hole.

A yawning Mom where you can see she’s missing one of her canine teeth.  Kicked in the mount?

And the pups who seemed to always be playing.

The other pack was 16 strong and no doubt a real killing machine.  We followed them for over an hour hoping to see a hunt but ultimately they gave us the slip.

Here the are trying to decide whether to cross the canal knowing full well that there are crocks around.

How would you like to see this coming at you? 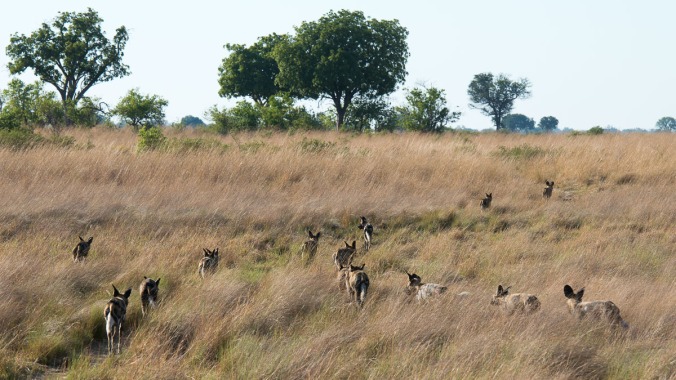