On our last evening of the safari, we went down to the watering hole to see who might stop by.  And boy were we happy that we did. 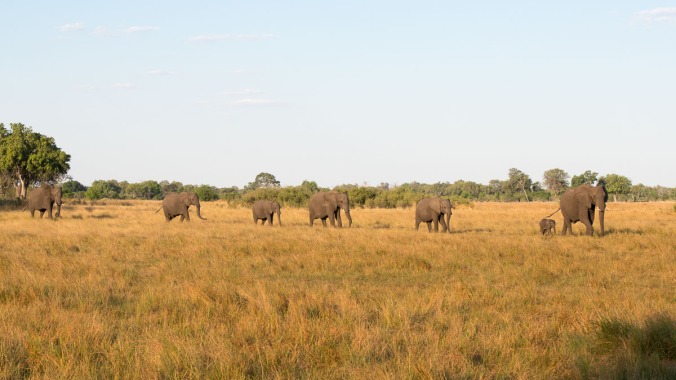 Here they are filling their trunks with water…

… and then placing the trunks in their mouths to drink the water. 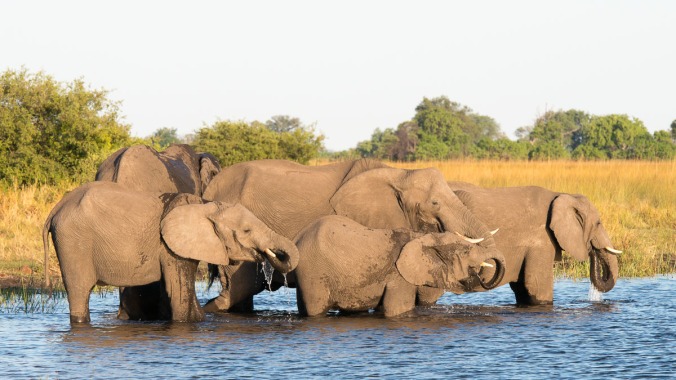 After drinking they would use their trunks to sling water and mud on their backs.  Look closely below.

And still another group!  It was getting crowded. 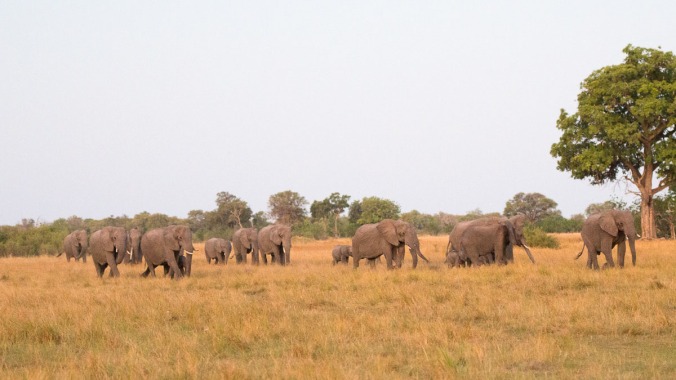 Finally this bull had had enough and challenged some new arrivals to find another spot on the watering hole.

Every day on our game drive, we observed lilac-breasted rollers.  So named because during their mating ritual, the males would fly up, tuck their wings roll, ie, tumble, back down.  Cool to see but I didn’t get a good shot of one doing his thing. 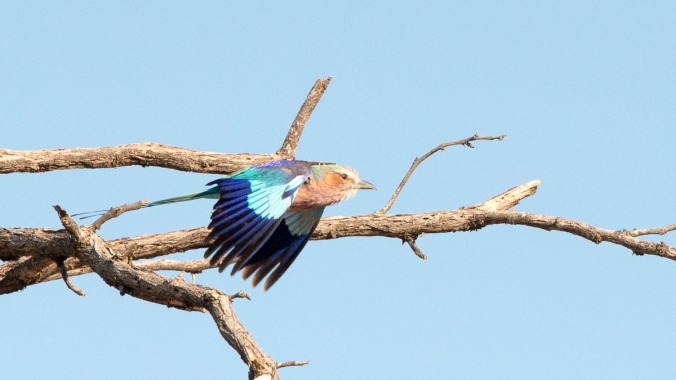 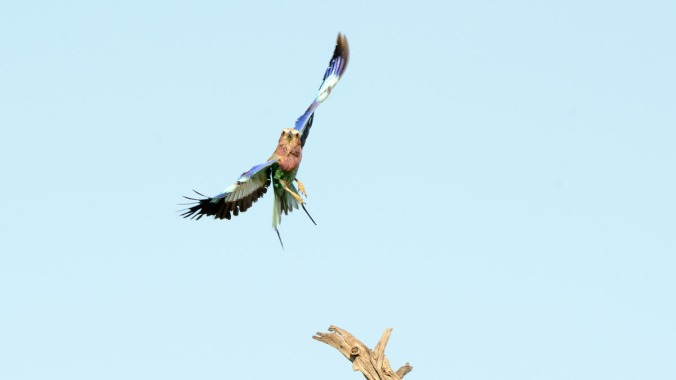 We didn’t see the hunt but we came upon her shortly thereafter. 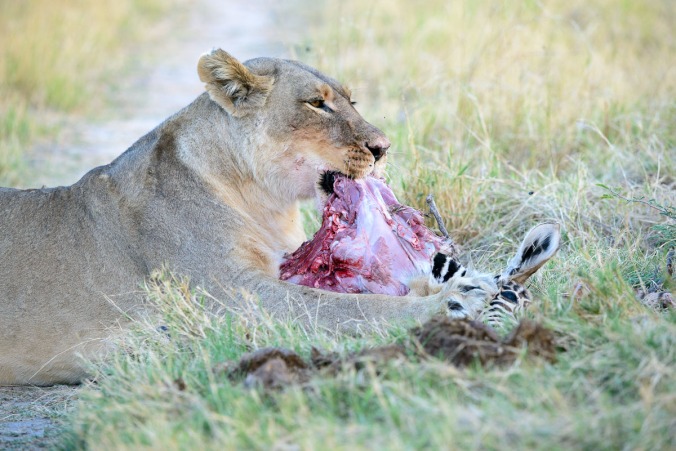 Leopards aren’t that common so you can imagine how thrilled we were to see one.

We tracked this fellow for over an hour and although he never did go on a hunt.

He was just content to lie in the bush so I suspect he had recently eaten.

With plenty of water in the Delta, it’s no surprise that there’s a wide variety of birds.

Common Ostrich that is native to Africa.  It defends itself by hiding, running or kicking with their powerful legs.  They can live to be 40-45 years old.

African Fish Eagle.  We saw these eagle everyday but unfortunately we didn’t see a successful hunt.  They mate for life and live to be 12-24 years old.

I have not been able to identify these beautiful birds.

This Kingfisher blew by at a high rate of speed and I was lucky to capture this shot.  However, with the sun behind her, it isn’t clear enough for me to positively identify the species.  Perhaps a Pied Kingfisher? 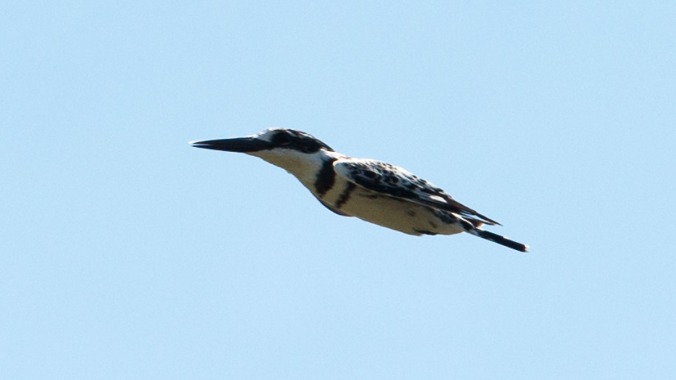 On my first afternoon, we ran into a pair of baby brown hyenas.  These guys were waiting at their den for their parents to return with food. 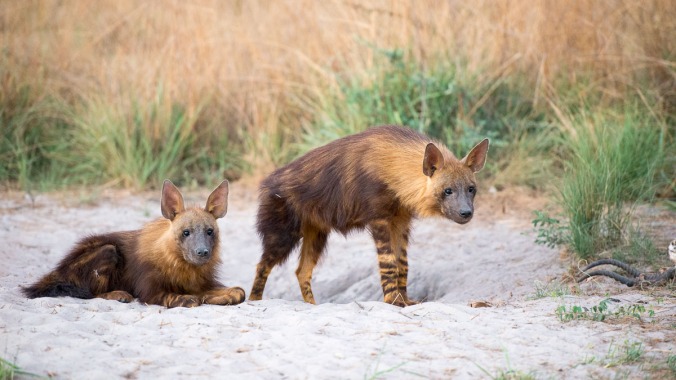 And the more common spotted hyena. 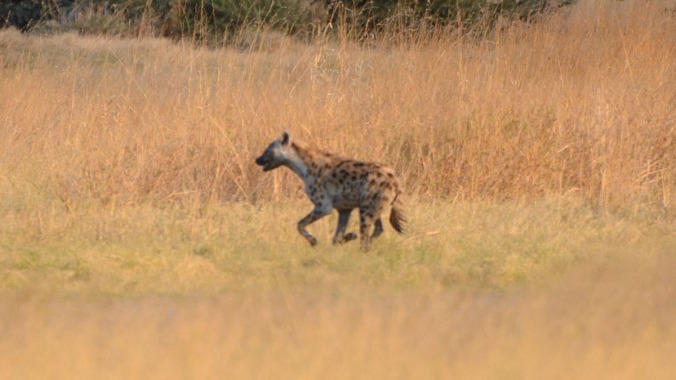 The coloring of the Plains zebras is interesting as they have brown stripes between their black stripes.

Like a lot of the plains animals, zebras are highly social and form harems with a single stallion, several mares, and their recent offspring.  Bachelor groups also form hoping some day for a harem of their own 🙂

Drinking with a baboon incoming.

There are several species of monkeys in the delta and perhaps the most common are the Vervet monkeys.  These handsome guys and gals live in social groups and males, upon reaching sexual maturity, move to a neighboring group. 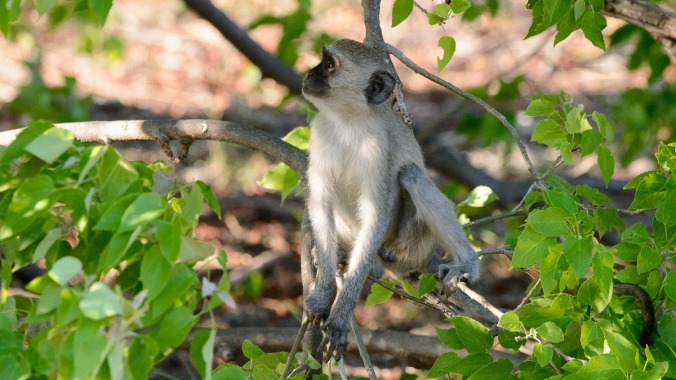 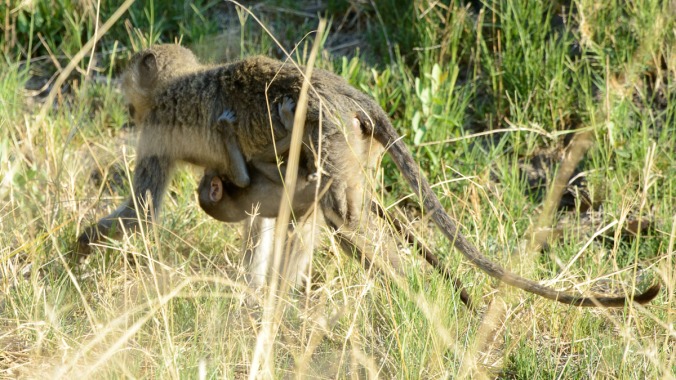 Hippos are a common sighting in the Okavango Delta thanks to the Okavango River that brings on ave 2.9 billion gal of water to the delta every year.

Hippos remain cool in the water by day and emerge at dusk to graze on the grasses.  They have large canine tusks and nearly hairless bodies.  With their tusks, they are king of the water and crocodiles don’t mess with them.

We didn’t see any out of the water so the only shots I have are of their heads.  This is a common scene.

And finally a close up.  See the whiskers?

On our first afternoon at the Splash Camp, we went to the watering hole and watched some wrestling elephants.  It was as unusual as it was spectacular.

Here they are getting started. 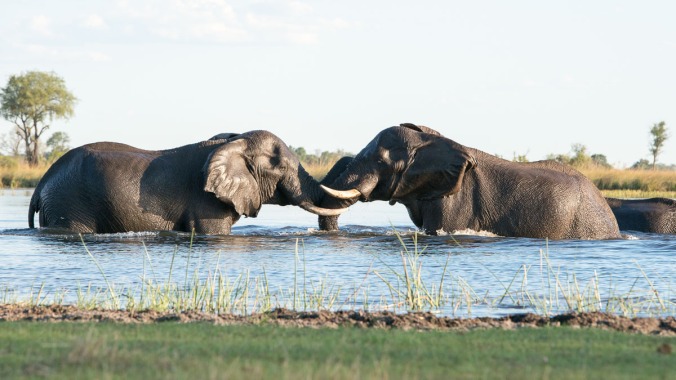 Then they separate and the guy on the left says “Come on.  Let’s do it again”.

So it was round 2 and it ended the same way as round 1:  guy on the right is bigger and stronger.

Not to be deterred, guy on the left pushes until guy on the right gets the submission.

They separate and the guy on the left reaches over and affectionately says “Thanks dude”. 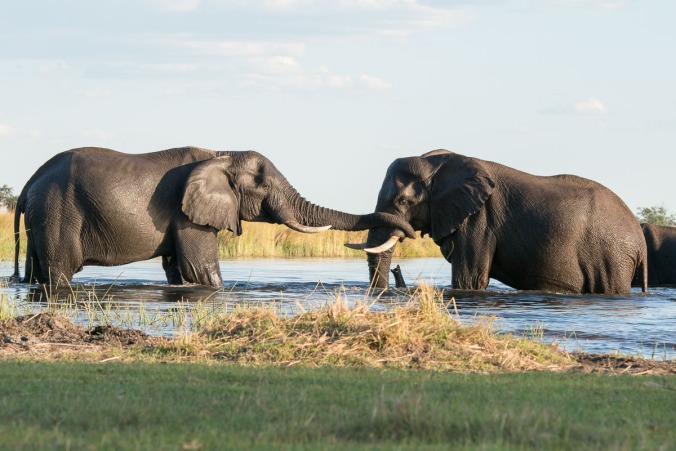 And then guy on the left says “Let’s go”. 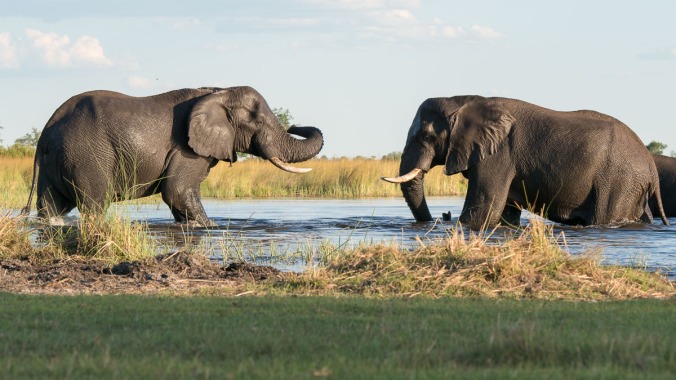 And off they went.